I've been asked by friends and clients several times, "HOW CAN I GET MY IDEAS HEARD?"  -- Here are 3 Ways to Get Your Ideas Heard so you can get to the business of actually using your ideas.

I originally wrote this for friends in the non-profit space and this cool group Blue Avocado published it! https://blueavocado.org/leadership-and-management/the-worst-way-to-share-an-idea-is-to-say-i-have-an-idea/

Remember: You have talent to offer and you can ensure your organization makes progress by providing them your talent in a way that doesn’t get overlooked.

How employees can help ideas be heard and embraced

Bryan has an idea for something he thinks might help his nonprofit. His supervisor, Wanda, already has a lot on her plate at the moment. When Bryan says, “Here’s my idea,” it feels like a threat to Wanda’s energy, even if she’s open to hearing it. It’s like passing possession of the idea to her—and now she has the added pressure to do something with it or otherwise be seen by Bryan as a place where his ideas go to die. To Wanda, it can also feel like a threat to her status because it wasn’t her idea, and thus the dynamic conflicts with Margaret Wheatley’s principle that people care about what they help to create.

I’d argue the worst way to share an idea is to say, “Here’s my idea” or “I have an idea.” Sharing your ideas like this can cause issues because of the implied ownership. A lot of times, leaders don’t have all the answers and would welcome some assistance; however, it’s important for us to offer it in the right way.

Our brains are constantly trying to predict what is going to happen next. The occurrence of new or uncertain things can cause confusion and anxiety that we physiologically work to avoid. So, we need ways to overcome these barriers.

“I have an idea” could be lazy. We think it’s providing an answer, but it is no shortcut. Here are three specific ways to help move your ideas forward faster:

If your audience fails to provide purposeful feedback or reacts negatively to your idea, you can respond with multiple What if’s? to redirect to a possible future and the potential around you.

There are creative collaborative situations where you can announce “I have an idea!” and your team may meet that with curiosity and attention, but that isn’t what you should plan for when you are attempting to drive progress.

One more tip! We don’t think about words. We think visually. Do you dream about words? No. Not even when you’re the editors at Blue Avocado. We dream with imagery. Whenever you share an idea, you should do so invoking imagery. Be as tangible and visual as possible, with sequences, charts, examples, and stories.

Here’s a short video with more tools to help. 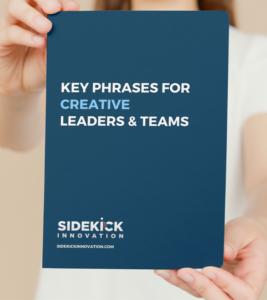 Key Phrases For Creative Leaders And Their Teams 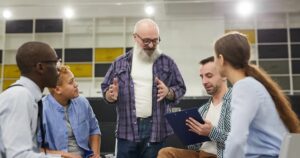 Why Do Stories Change Our Attitudes, Behaviors, And Beliefs? 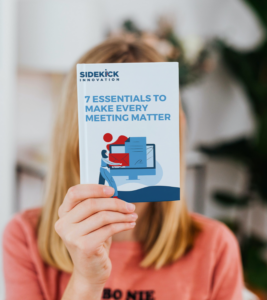 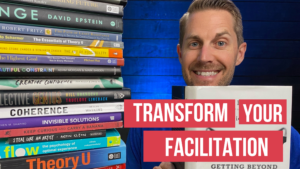 Transform Your Facilitation Skills with 4 Books, 1 Blog, and 1 Phrase "Without Sidekick’s help, we would not have uncovered the direction and creativity that’s moving us forward today."